Understanding the impact of the Federal Interest rate on mortgage rates

The increase in the federal interest rate is the topic du jour. But what does this mean in real terms for the average home buyer and the home market in general?

The US Federal Reserve or ‘the Fed’ is the central bank which loans money to banks and sets the interest rate based on the state of the national economy. Increasing the interest rate discourages spending and keeps the costs of goods and services lower by decreasing demand. An increase in interest rates encourages borrowing and spending which generally stimulates growth.

Interest rates have fluctuated between near zero and highs of over 20 in the last 60 years. Check out the graph below for the context of current federal interest rates. 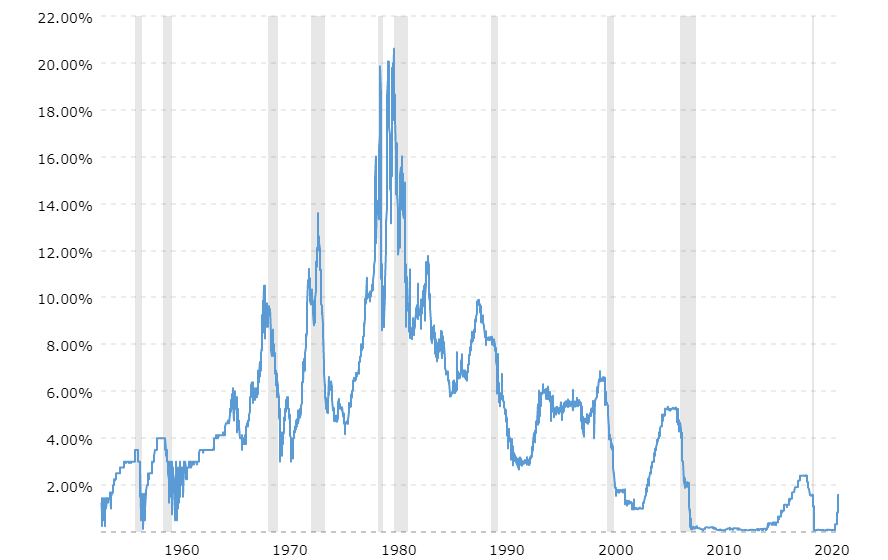 Compare the above chart with the chart below of average mortgage rates since the 1970’s. 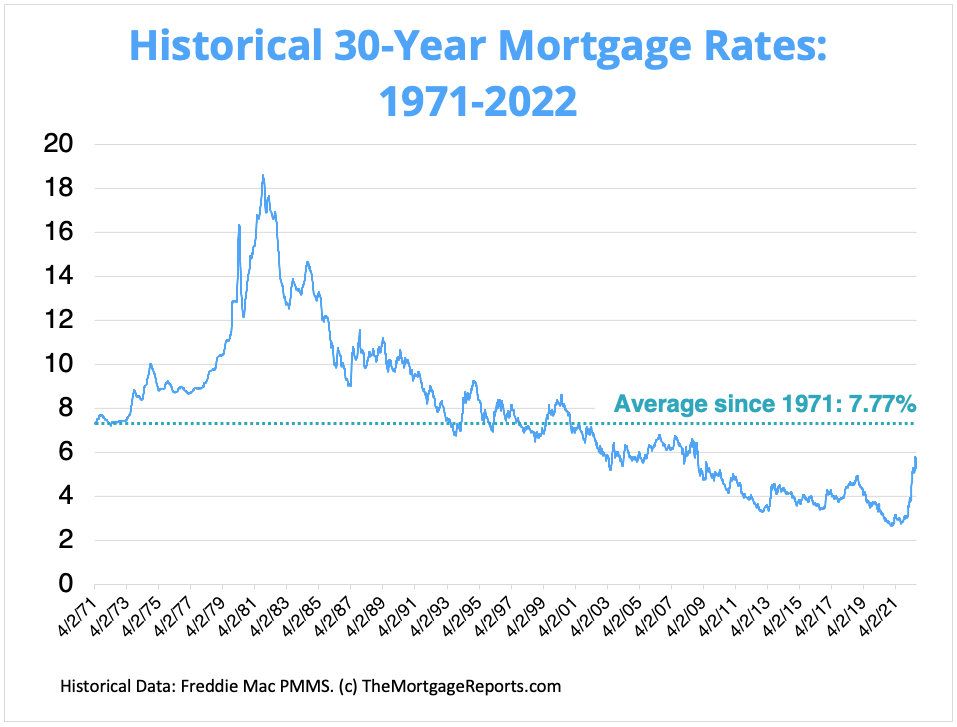 Mortgage lenders also have an interest in keeping their rates less volatile than Federal Interest rates to prevent shock.

Let’s look at the difference between a 3% and a 5% interest rate for a conventional 30 year loan with 5% down on a $250,000 home. As you can see from the charts below the monthly payment difference between a 3% and 5% loan is over $200 per month, which almost doubles when looking at a 6% rate. For a homeowner to afford the monthly payment, they will need to have a better income to debt ratio as well as more for down payment. 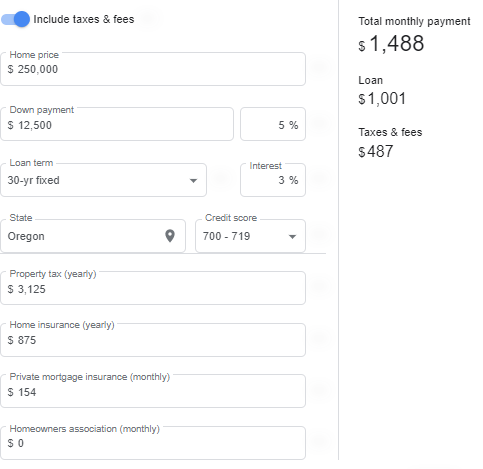 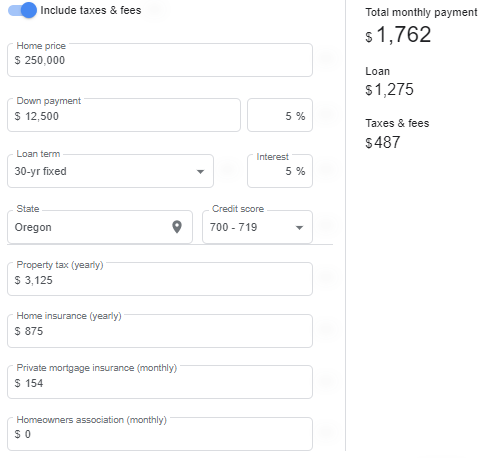 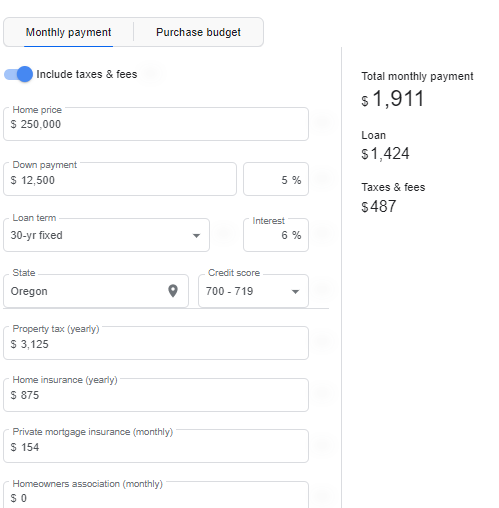 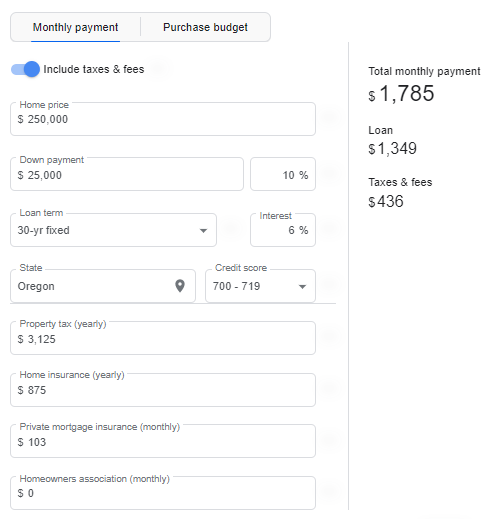 This could potentially be a great thing for middle income buyers. Even though the interest rates are higher which increases the cost of the loan, there are fewer buyers which means fewer bidding wars. In Beaverton for instance this could knock off an additional $50,000 from the final price of the home!

A deeper dive into the recent housing market trends

The dream of many young adults, and even older adults, is to one day own a home. This right-of-passage has become increasingly more out-of-reach as wage growth hasn’t kept up with inflation, let alone home prices. But the market is controlled by factors largely outside of the average American home buyer's control. And Zillow is now facing a class action lawsuit for market manipulation. Lets take a look at some of the factors that lead to Zillow dominating the home buying and real estate market, as well as the potential fall out.

First some data. The way people buy and sell homes has changed a great deal in the 30+ years since the takeover of the internet. Whether you look at the inception date of 1983 or Google’s birthday in 1998, the increasing digitalization of commerce and tracking means that we have substantive data to evaluate regarding what people are looking for, how they search, and where they search.

We’re going to look at a few different factors here. First the search terms. Google analytics show that within the US, people searching for housing is relatively stable and fluctuates cyclically generally peaking in the summer and waning in the winter. Nobody wants to move in the middle of a snow storm. Not surprisingly, there were two peaks in people searching for housing, just before the 2007/08 housing market crash, and March of 2020 when people looked for new places where they could escape the pandemic. 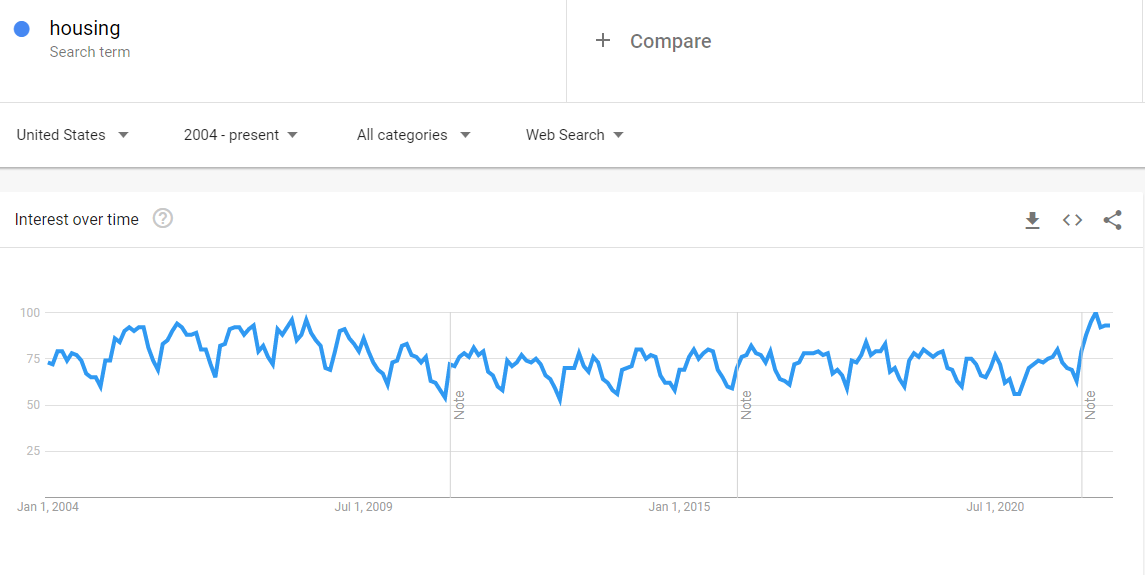 Let's drill down more. In Oregon, this trend was somewhat muted since social distancing is already possible throughout most of the state. The biggest signal coming from the Willamette Valley, Oregon’s most populous region. Most people don’t search for the term housing when they want to buy or sell their home. Let’s instead look at a few other search terms including, homes for sale, real estate, mortgage loans, and of course “Zillow.” 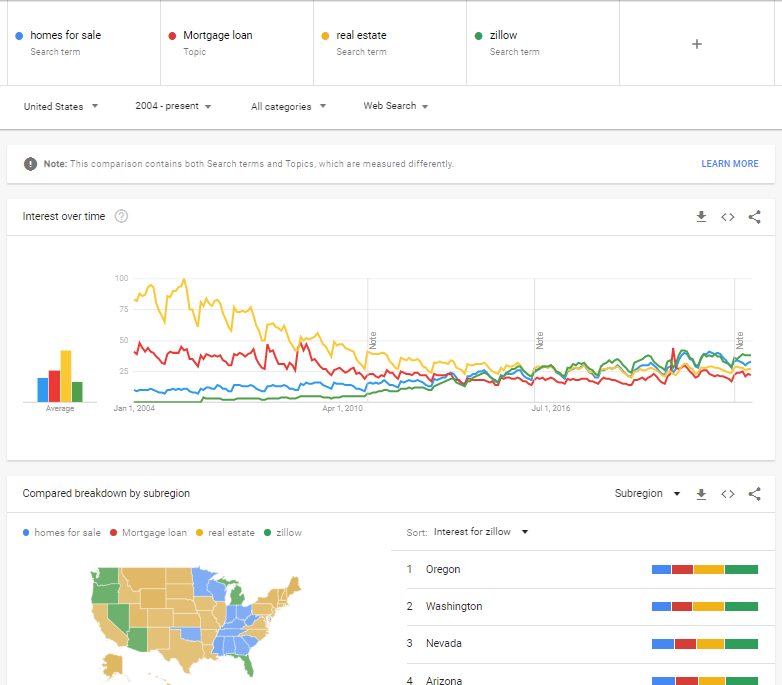 As you can see, over time, as the internet became more effective, the term real estate was replaced with homes for sale, which became ubiquitous for Zillow starting around 2012. Surprisingly, search terms for mortgage lender matched the seasonality of homes for sale and real estate but decreased right around the same time as Zillow took off. Likely because part of Zillow’s service included connecting potential buyer’s with lenders in their network. Searches for mortgage lenders peaked around March 2020 but never quite hit the highs of the pre-bubble burst of 2007.

What did this do for Zillow's stock? It skyrocketed in March 2020 like many tech companies that provided services during the pandemic.

Of course Zillow isn’t entirely to blame for the housing market recession. Many people across all income brackets are finding that the purchasing power of their wages is progressively less as inflation increases.

Zillow is accused of misleading investors regarding the state of their now shuttered home buying arm. By purchasing homes they controlled both ends of the real estate transaction and had more control over comps which lead buyers to believe that home prices in many areas were increasing because of surging demand. Zillow was then left with a surplus of inventory that couldn't move at their inflated prices. They inflated prices in markets that couldn’t support it, pricing many out of homes altogether. When the market bubble peaked many were left without options for buying a home, which coupled with increasing rents exacerbated the ongoing housing crisis in many cities. 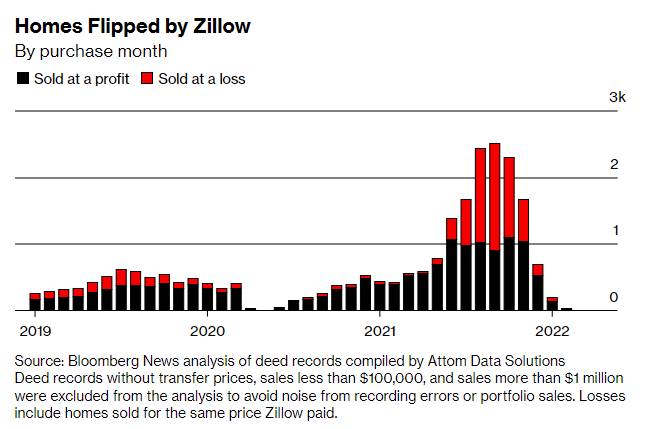 The result is that investors who bought prior to the pandemic and sold at the peak of the market in 2021 made a lot of money, while new investors who bought on the way to the top may have to suffer the loss. Zillow had a nearly half a billion dollar write down and laid off 2000 people. In May of 2022 CEO Rich Barton told shareholders that Zillow now has $3.6 billion in cash, up $500 million from the previous quarter. So the write down went straight to the balance sheet in the form of cash. It's likely that Zillow will take several years to recover stock price, if ever.

Naturally the Vice President of Recruiting for Zillow for the past 17 years is leaving for Google.

During the pandemic US home prices grew 40-50% in most major markets as people moved to suburbs and rural areas. One assessment found that a US household would have to spend 31% of its monthly income to make a mortgage payment for an average-priced home, the highest mortgage payment to income ratio since 2007. 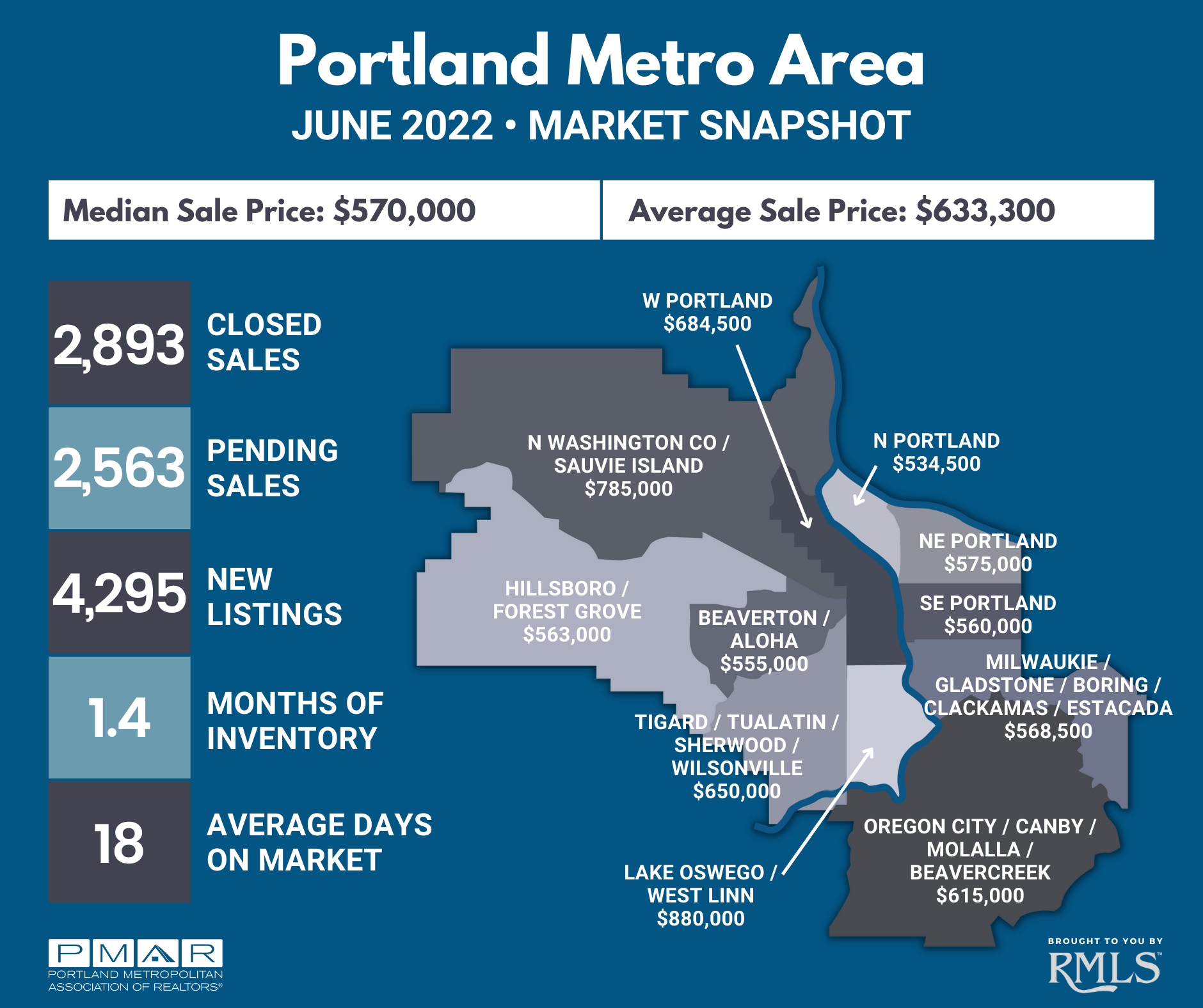 Coupled with rising interest rates and existing home inventory being at all time lows, this means that prices may soon correct allowing more people to enter the property ladder.

This could actually be a good thing for first time home buyers and those on a budget. As the market corrects home prices above market value will likely lower and interest rates should go down. Moody’s predicts a 5% housing price drop nationwide and upwards of 20% in the most overvalued markets.

A new report from the Oregon Department of Economic Analysis released a report indicating that only 1 in 5 people can afford a home in the Portland metro area, a similar rate to other cities in Oregon. This has an impact on demand, fewer people are able to buy homes, which can decrease competition for existing homes for sale.

A quick back of the hand calculation using Portland median household income of ~$73,000 and a 25% allocation for living expenses suggest that an affordable home in the Portland area would be between $200,000 and $300,000, depending on the down payment and loan terms. The inventory available in this price range is limited to tear-downs, extreme fixer uppers appealing to investors, manufactured housing in parks, and floating houses with high monthly slip fees.

This means that anyone trying to purchase a home in the Portland area at the median household income will not likely find something that will build value without a significant cash investment. Coupled with the slowdown in apartment building, rising rents, and increased property taxes, Oregon is becoming increasingly unaffordable.

So what is a new home buyer to do? Get creative. Firstly condos are good options in some cases. They can increase in value depending upon the unit and location. There is a reduced maintenance cost since the monthly fee is spread amongst many residents. If that isn't appealing consider purchasing a home with a family member or group of close friends. While this can increase complications, in the right circumstance it can make entering the property ladder possible. When neither of these options seem possible reach out to a lender and real estate agent. You might be surprised with what is possible. Build a team of people that can support and encourage you towards your goal. Happy house hunting!

Guide to Selling or Buying a Home

Buying or selling real estate is stressful enough, we're here to make it easy. Here's a helpful guide to getting your home ready to sell as well as information about the home buying process.

Download the full Guide: How to Sell Your House

Download the full Guide: How to Buy a House

How to Sell Your House

How to Buy A House

Get the most out of your experience by connecting with a trusted real estate agent who can help navigate the process for you.

Posted in Home Buying and Selling Guides
no comments yet

Home prices in Oregon have doubled over the last decade, with a steady rise in prices that increased sharply during the pandemic as more people wanted work-from-home spaces. Home affordability has hit a 35 year low.

Oregon’s housing prices are higher than the US average driven largely by home prices in Portland. As many people left the city proper for the suburbs, for Seattle, and other states, this created a housing supply shortage as affordable homes were snapped up quickly leaving many buyers priced out of the market altogether. 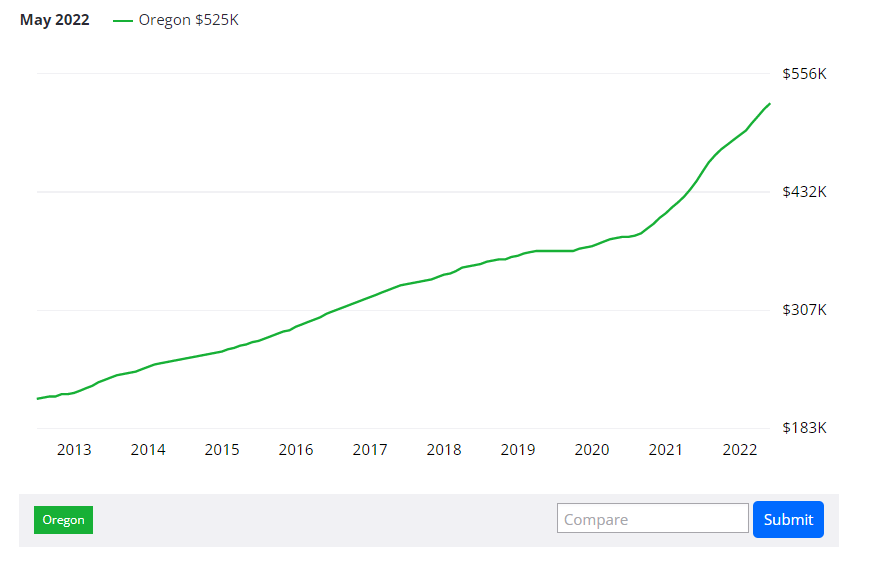 There is about one-third the inventory historically available, so even though home affordability is about the same as it was in 2006, the low inventory is keeping prices higher.  This means that many new homeowners aren’t buying, even though they’d like to. 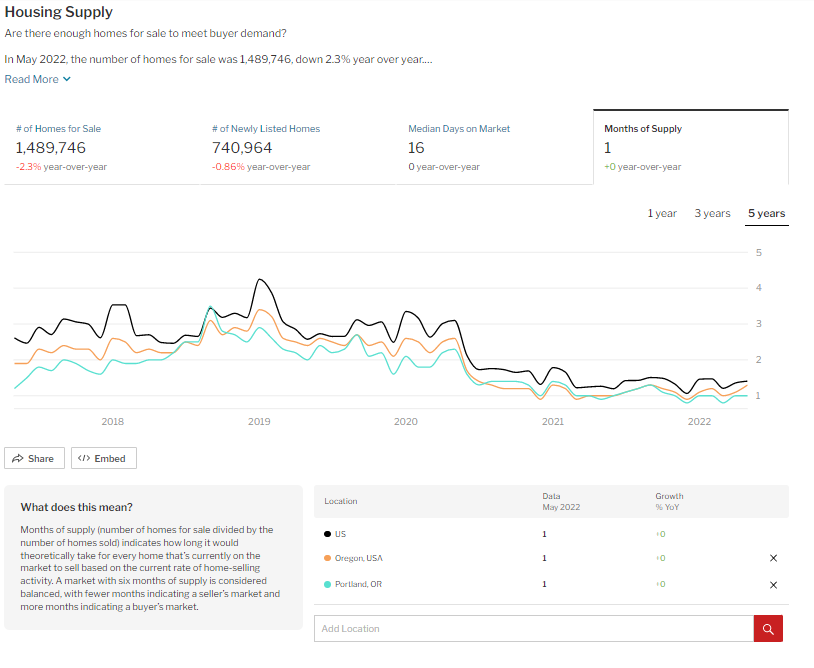 Mortgage demand is as low as it has been since 2018, but with increasing mortgage rates, bidding wars may start to cool down leaving more options on the table for first time home buyers. This downward trend suggests that those who were able to buy homes when the inventory was high, prices were average, and mortgage rates were as low as they’ve been in decades have already purchased their homes. 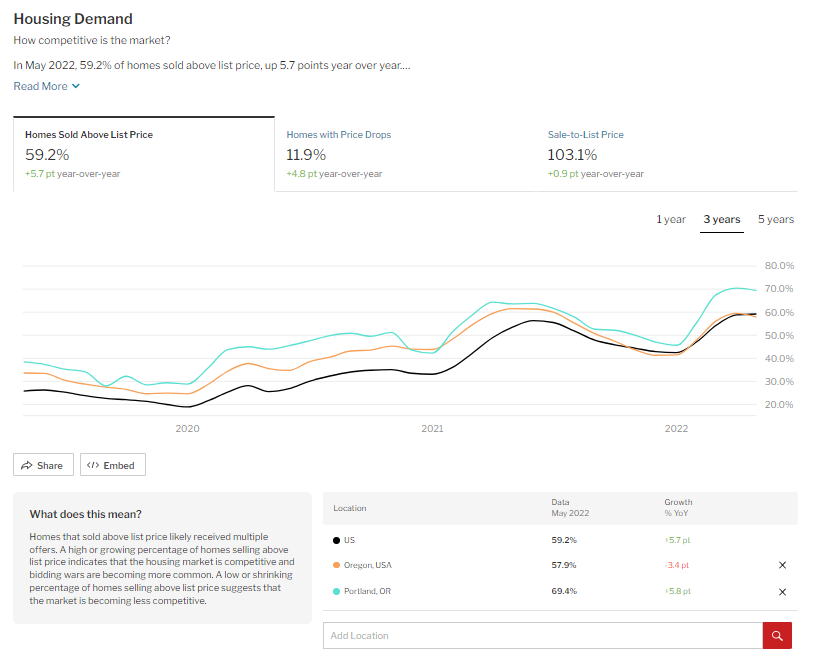 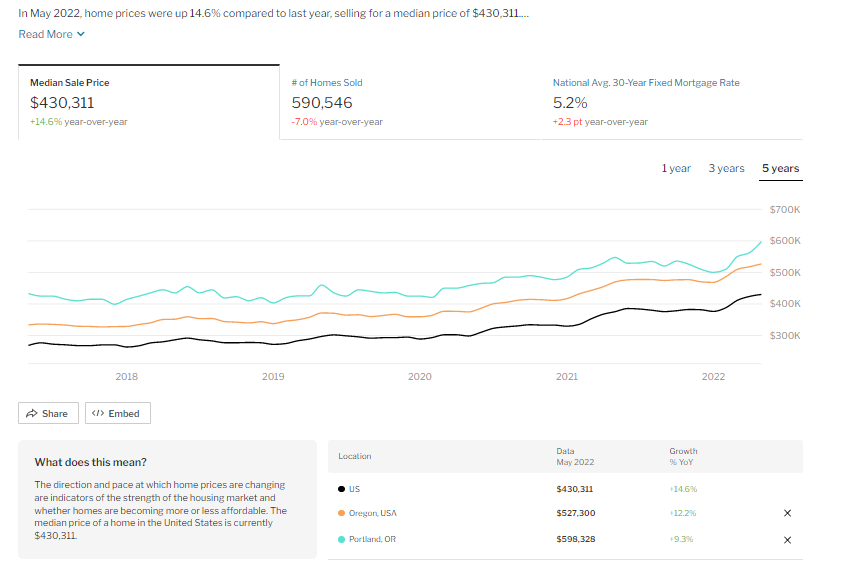 Sign up to receive a market report of pending, active and sold properties straight to your inbox. If you are wondering if now is the time to sell, please try out our INSTANT home value tool to get a property value estimation.